After 7 weeks of travel, I entered Rome feeling… sick. I had planned for three days in the ridiculously historic city, but thanks to a case of Strep Throat, found myself with one day (and a lot of drugs to take) left to explore ancient Rome. Who says you can’t see Rome in a day? At this point in my trip, I’m about museum-and-churched-out, so it was the ruins and remains of ancient Rome that I was most interested in seeing. It’s hard to imagine that the Colosseum is nearly 2,000 years old, as modern sporting venues are still so similar. There were gate numbers, “season ticket” seats, and of course vicious crowds rooting for blood.

Afterwards, I visited the Roman Forum, a vast expanse of ruins of the Roman city. All throughout Rome, there are small squares containing ruins of pillars and walls, easily accessible by pedestrians and yet just sitting there. It’s a bit strange to think that throughout the ages, someone was conscious enough of their importance and relevance to just leave them be.

The Vatican and Sistine Chapel was next on my list, and did not fail to disappoint. It’s a bit incomprehensible the amount of work that went into painting the chapel from floor to ceiling in dozens of bright, colorful scenes. I finished up my day in Rome walking to The Pantheon and Trevi Fountain, but had only accomplished seeing a very small portion of all there is to see in the expansive city.

Florence was a return to the heat and humidity that I felt in Portugal, and walking around the smaller city was sure to get you sweating. As the birthplace of the Renaissance, the most noticeably unique characteristic of the city was the style of the Duomo and nearby clocktower – white, green, and red granite in a very particular geometric pattern. All around the city were impressive sculptures, statues, and fountains. The highlight of Florence for me was watching the sunset from Piazzale Michelangelo across the river, with a view of the entire city below. 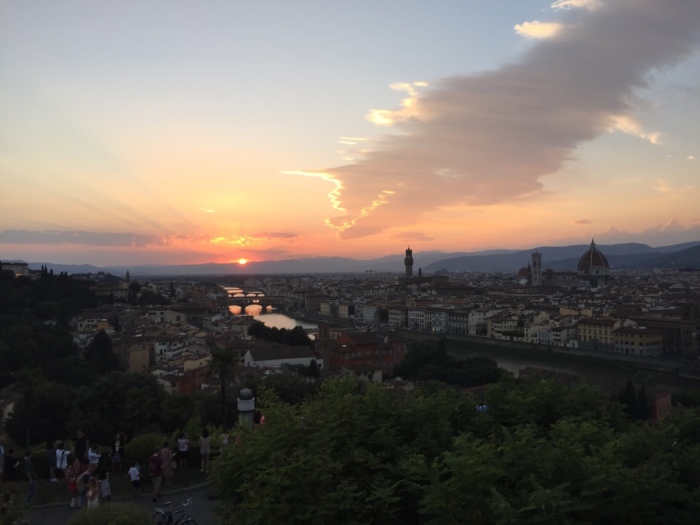 I spent only a short time in Naples, but long enough to appreciate a few Neapolitan pizzas, identifiable by their leopard skin crust and soupy, olive-oil centers. One of my favorite strolls thus far has been a Sunday night walk along the bay in Naples. People lay out along the rocks and beach in the sun, children blow bubbles and play, and couples sit on the railing enjoying gelato. To me, it’s one of the best examples of a community of people living in the moment and enjoying life.

The southern coast of Italy was where I had planned for the “relaxing” part of this journey, and it has served just that purpose. After an hour bus ride along a beautiful but small coastal road (no doubt, the most skilled bus drivers I’ve ever seen. I would have bet that it was impossible to fit two coach buses on this path, but they do it regularly), I arrived in Atrani. Atrani is a tiny town with a small black sand beach. Within a day of arrival, you already feel like a local. Beyond the beach is a small tunnel, which brings you to the town square with 4-5 restaurants, and that’s pretty much it. There are very few international tourists here, and most of the conversations on the small beach are in Italian. The magnificent coastline is made of jagged rock formations topped with small trees and bushes. The sun sets early in the town – around 5:30pm – due to it’s location in a narrow valley. Hours later across the sea, the moon rises and for reasons I’ve yet to look up, appears larger than I’ve ever seen it, shimmering in the Mediterranean and illuminating the coast. Atrani has been the perfect quiet get away to retreat within oneself while among the fascinating views of the Italian coast. 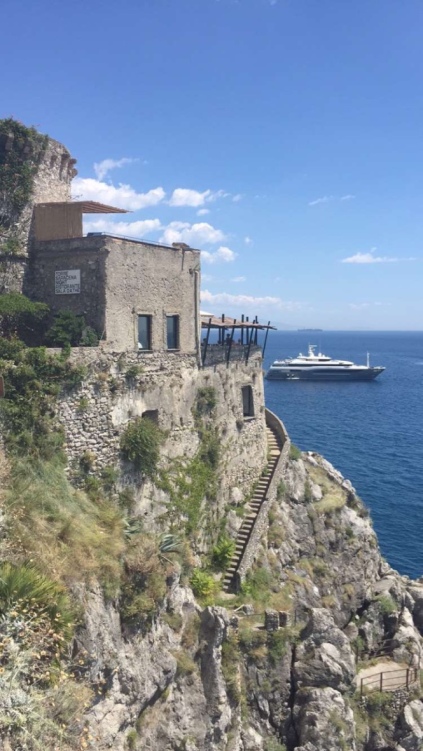