I arrived in Portugal’s capital, Lisbon, around 8am and could already feel the heat of the sun beaming down on my shoulders. While near the coast, the city of Lisbon is actually inland a bit, although it is situated right along a river which also contains a familiar looking bridge. My two days in the city would come to be looked back on as a few of the hottest and sweatiest – there was not a cloud in the sky and the sun is unforgiving until 9:30pm. To make matters worse, it’s a very hilly city, with paths that go uphill steeply, downhill, and then uphill once again (at times, there’s a completely flat pathway one street over). The streets of Lisbon are hand paved using mostly white stone, which reflects the sun’s rays back onto you from below, leaving little respite from the heat.

I found the city to be a bit overly tourist (speaking as one, of course), and many of the areas that I was in were overpriced and packed. As with any area, wandering off the beaten path paid dividends by finding quite niches of authentic Portuguese establishments. The real saving grace of Lisbon is the view from above. The collection of orange clay rooftops cascading into the river when viewed from the hilltops is certainly a sight to be seen. I was also fortunate enough to attend a public viewing party of the Portugal vs. Poland Euro Cup game (Portugal would go on to win the tournament as a major underdog) in the town’s biggest square, with a few friends a had met in Madrid earlier in the week.

By pure happenstance, I arrived in Porto, Portugal on the day of the Sao Joao festival – the biggest party of the year. To the outsider, Sao Joao is one of the more ridiculous traditions – but I’ll get to that. Walking from the train station to the hostel, the streets were lined with shop owners setting up bars, grills, and decorations one after another in preparation of the evening. After a group dinner of traditional Portuguese food at the hostel, a group of travelers led by our hostel guides headed out to watch the fireworks around 11:30pm. There are many traditions of Sao Joao, and fireworks are probably the most familiar. It’s also a night of luminaries, where thousands of floating lanterns fill the sky (and at times, crash into crowds). My favorite tradition though, is that of the hammers. All around town, plastic hammers in all sizes are for sale. These are the types of hammers that make a “squeaky” noise (for lack of a better description) when hit.  Children and adults arm themselves with these hammers and throughout the evening… hit absolutely everyone else on the head with them. As strangers pass you, hit them on the head. Sneak up behind someone, hit them on the head. If someone hits you, hit them on the head. The streets are so crowded that it’s difficult to move quickly anywhere, so most of the night is spent in a slow crawl being hit on the head with hammers by children and adults alike. It brings out the inner child in everyone and fosters a real sense of community and camaraderie to the town. The longest surviving festival goers stay out until 5am wandering the streets drinking, listening to the music, and hitting each other with hammers.

Beyond Sao Joao, Porto is a beautiful city nestled on hills and bisected by a river. The main city center is on the north side, while the south side is primarily warehouses for Porto Wine. Along this southern riverside is stunning greenery. 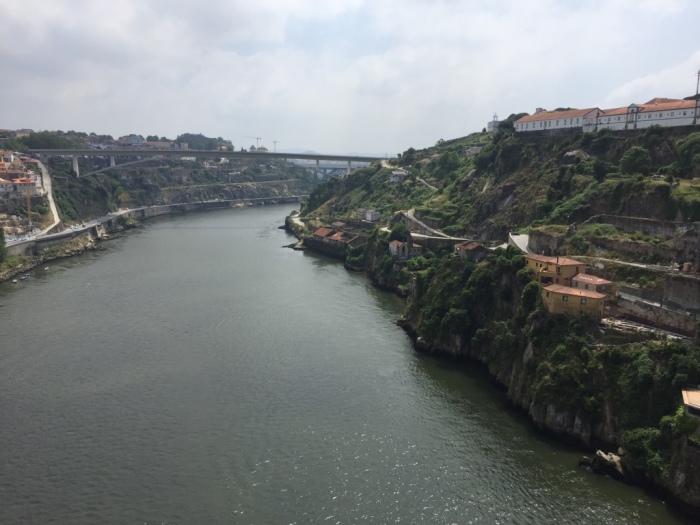